Exclusive interview with U Aung Thu Nyein , Director of Communications Program , Institute for strategy and policy

Chinese President Xi Jinping is about to visit Myanmar in January 17, as the two country is setting up the milestone on 70 years of relationship, this year. Voice of Myanmar’s Chief Editor Ko Nay Lin talked with U Aung Thu Nyein, Director of Communication program of Institute for Strategy and Policy, about the relationships of China and Myanmar.

U Aung Thu Nyein: China has been interested in the relationship with Myanmar for a long time. Myanmar and China have close tie which used to call as a friendship such as the relatives as we are the neighboring countries. Moreover, China is interesting to expend a sea port to Indian Ocean through Myanmar, since they have two ocean policy, Pacific Ocean and Indian Ocean. So, the road which will connect China and Kyaukphyu port plays important role for China. The Gas pipe Lin which crossing through Myanmar from Kyaukphyu and China Myanmar Economic Corridor CMEC road is very important for this. The agreement for CMEC project was signed in 2018. These are some important steps which China made for economic ties.

Before the state counselor lead Myanmar defense team to ICJ, in December, Chinese Minister of Foreign Affairs visited Myanmar and I think it was the preliminary visit before the President Xi Jinping. President Xi has been planning to visit Myanmar for a long time. The last time he visit Myanmar was in 2009. Under the governance of President U Thein Sein, he wasn’t visited. During that time, there are situation that President U Thein Sein promised to call off the Myitsone hydropower dam projects. When NLD sworn in, it was told severally that President Xi Jinping would visit the country, but he arrived only in this time.

During such visits of the top leaders, the two countries used to signed the MOUs.

VOM: Do you think President Xi’s visit would bring the Myitsone Dam projects back to live?

UATN: I think China did not need the electricity anymore. But the problem is their dignity. Before, they need the electricity, but not now. The Myisone project was signed by President Xi, himself. So, China Maugham not want to loose their image and dignity. So, during his visit this time, he might speak out about this issue, I think, but I could not tell that exactly.

VOM: What would you like to suggest President Xi and Myanmar government?

UATN: For any project they would do, they may need to follow the standard of the project exactly. That means they should take full responsibilities. The locals and the CSOs also need to push them. China has teams to study and research the proposed project and they have abilities to do the preliminary inspections systematically. For us, we only have a committee to lead such team but we do not have the researchers or experts to do the job. This is our weakness. So, when China or any other country propose the projects, the government just look at it and agree it right away. We have no chance yet to examine, research or study thoroughly before the agreement, and that’s our weakness.

VOM: So, the government has to practice more on look East policy, but on the other hand, it cannot let go the relationship with the western communities. Moreover, China seems to loose its favor over NLD government, compare to the past governments. Will there be any other pressures from China?

UATN: I don’t think so. China has many changes over the past years. When we look at the governance of Chinese government, they have invented Xi Jinping’s though, rather than sticking onto communism. They also invented a Chinese model and trying to introduce it to the world and doing many propaganda for it. So, rather than pressuring Myanmar, they would persuade to practice their Chinese model.

VOM: Who will benefit most from this visit of President Xi?

UATN: I think there will be more Chinese investor flood into the country. Only we have to say is if those investments are benefit the locals. These depends a lot on the government who are going to handle the issue. I hope the government would not give favors to China, looking only to gain the political and economic benefits.

VOM: In this year, the relationship with China will turn 70 years. Do you think Myanmar has wining situation by having close tie with the super power neighboring country?

UATN: It is not so easy to be a neighboring country with the super power country such as China. Because we also have impacts by being a neighbor and having relationship with them. President Xi’s visit is important for the country that we need to watch over and study. 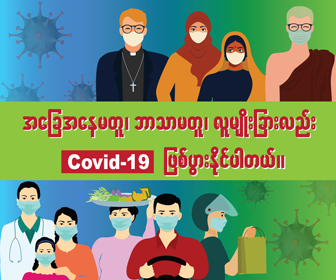